That’s Wimbledon as in tennis not the town per se.

So here’s the thing. I don’t really get sport. Humans run around or move slowly (argh!) and poke balls into holes, over nets or into the back of them.

Take them out and do it all again.

But then I don’t get Guy Fawkes/Bonfire night either. Humans set fire to fake humans and scream with delight when a load of chemicals make a very loud noise above your head?  Like a rainbow but noisier and a tad more polluting.

I liked the jacket spuds though even if you had to eat them with ridiculous plastic forks.

So, it is now July on planet earth and humans will be queueing around the block to watch other humans run around sometimes like headless chickens to.. yes .. you guessed it, lob a ball over a net.

Why, you may ask?

So that the other chickens, I mean humans, can lob it back but be careful it doesn’t hit the net.

There is a strict protocol to this much beloved form of entertainment but I am deuced if I get it. Couldn’t resist…

Clothes to be worn, refreshments to be partaken and a whole set of rules and language that would send any visiting Martians scurrying back to the red planet, rolling their eyes (all three of them)

Okay, I apologise. Not politically correct to stereotype all Martians. The third eye isn’t always visible I am reliably told.

Still with me? Still wondering where carers fit into this scenario?

You arrive for a two week stay with a new client.

Everything is all clean and shiny.

Rules of combat (sorry, I mean daily routine is itemised)

Whilst your athletes are warming up for the first lob over the net, you (aka carer/umpire) are warming the pot.

That first cup of tea. Teapot, mug, cup and saucer? Teabag, loose tea? Sugar cubes? Milk first or after in a jug…?

On a tray? Wherever they may be.

You don’t want to fall at the first hurdle.

Within the next few hours the volleys come thick and fast.

You open kitchen cupboard doors with lightning speed as you try to remember where on earth  you saw the pasta sauce for tonight’s supper.

A disembodied voice from the living room.

She’ll be on the phone to her oldest friend (at the Bridge club ) soon.

‘She’s having trouble finding things in the kitchen.’

The umpire cannot strike back! There are no ball boys/girls.

You, carer/umpire must juggle all given tasks with aplomb.

Things settle down after the first few hours. A gentle toing and froing.

The odd gasp as the ball hits the line.

You may have pegged the washing out ‘upside down’.

Is it time for strawberries and cream?

And that obvious dilemma. Cream or jam first if scones are involved?

Waitrose will be delivering because going to the actual supermarket would mean missing a match. 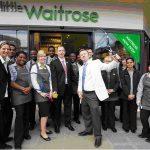 The client watches as you iron their favourite Marks and Spencer blouse.

Their head moves almost imperceptibly but their eyes are with your every move.

We try to keep everyone happy whilst being impartial and fair and wondering if it’s too late to train as an intergalactic pilot…?

There may be tantrums, a touch of the McEnroes  but once the two weeks are finished you can hand over the baton with new found energy.

By the time you get to the end of play. Game, set and match, you are ready to line up the balls for the next carer.

And I conclude with a story from one of my favourite clients.

Rose was watching the tennis. I waited with a laden tray by the door until a suitable pause in the thwack, gasp, thwack occurred. Rose was looking unusually disgruntled. I was loathed to ask as I envisaged a twenty minute tirade as to why her favourite was not playing well or being unfairly treated by the linesman etc…but it seemed the issue furrowing her brow was this.

‘He’s having to play in the glare of the sunshine whilst the other one is in the shade!’

This really wasn’t the moment to mention, earth, sun, axis, revolving etc so I just agreed.

Sometime later I re-entered the sanctity of all things Wimbledon.

‘Did you ring them and complain?’ Rose looks admiringly at me.

My mind darted about for morsels of forgotten instructions…butchers, florists, grandchildren?

‘Well someone must have. Look, they’ve moved it. They are both in the shade now.’

What an opportunity I missed there.

Carer tilts axis of the planet to save the day or something similar.

Some days that feels exactly how it is, the life of a live in carer.

Other days it’s all strawberries and cream. A mere trifle 😉 Here’s one I made for Rose. 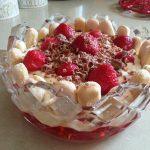